Time for your afternoon refill ☕️

@fujiguru approves of our nitro cold brew & we mor

We're kind of into ocotillo at the moment. While s

Houston folks, you can get our coffee at @blackhol

Vienna Roast is characterized by a slightly deeper

Imagine drinking coffee with this view of Cathedra

Do you order whole bean or ground?

September coffee of the month is Mexico Chiapas! Y 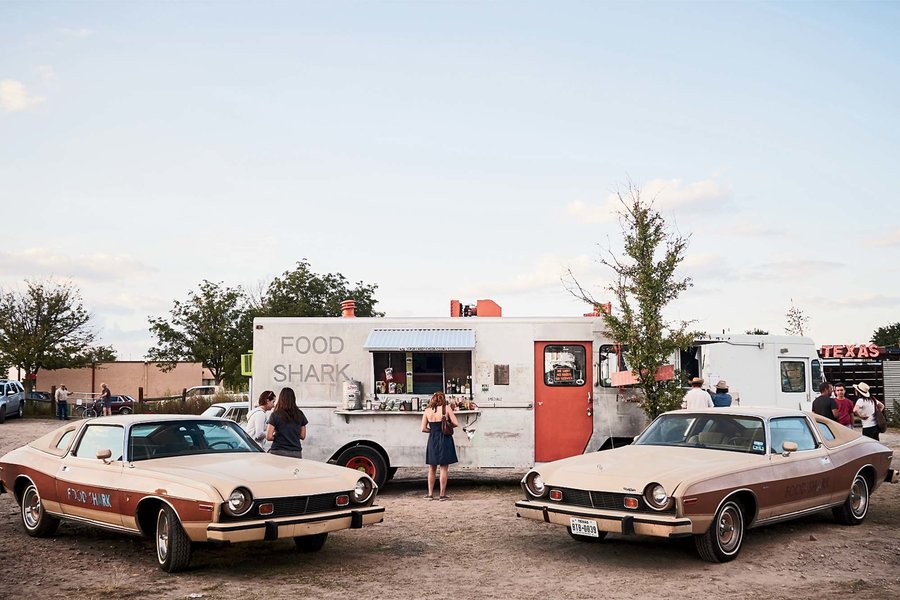 With chefs, shop owners, and makers of all kinds putting down roots, Marfa is riding its next creative wave.

It’s nearing noon on a bright Wednesday morning, and Virginia Lebermann is perched on the ledge of the adobe fireplace in her home library, puffing on an American Spirit cigarette. The Marfa visionary is herself a vision, with her Austen-heroine posture and custom-made cowboy boots patterned with peacock feathers. It’s been an incredibly busy few days for Lebermann and her husband, the chef Rocky Barnette, and she’s still catching her breath. “We always joke and say we go to New York to get rest,” she says.

She’s joking but not joking. As if she weren’t busy enough running the hit restaurant Capri, the restored 1950s motel Thunderbird (rooms from $149), and the world-renowned arts foundation Ballroom Marfa––whose desert installation Prada Marfa became an Instagram pilgrimage site when Beyoncé posted a selfie in front of it––Lebermann is Marfa’s de facto host. The week prior, in addition to entertaining Louis and Marjorie Susman, the former U.S. ambassador to the U.K. and his wife, she played guide to Instagram creative director Charles Porch.

Lebermann is emblematic of a group of creatives who in the past few years have put down more permanent roots here. What once felt like a one-horse town––a place that drew minimalist artist Donald Judd from New York in 1977, who built a mini-city to display his work, and then a resilient group of firstwave settlers who recall a dusty place with little other than a Dairy Queen––has evolved into a stylish destination. In recent years, there has been an influx of ambitious restaurants; smart shops like Freda and Mano Mercantile, run by two Rhode Island School of Design grads; and stylish hotels, such as the 55-room Saint George (rooms from $230; marfasaintgeorge.com), which, naturally, displays works by blue-chip artists like Christopher Wool and Mark Flood.

Lebermann’s passion for the absurdly photogenic West Texas town, which sits three hours southeast of El Paso, is why Phaidon tapped her to write a book about it. Out next spring, it’s being shot by fashion and design photographer Douglas Friedman, who built a breathtaking modernist house on the outskirts of town after visiting five years ago and feeling what he calls a “primal need” to own a plot of land here.

“People don’t come here to drop in and shut off,” says Simone Rubi, a former Los Angeles resident who moved here five years ago. “They come to do and make.” In addition to co-owning Do Your Thing (do yourthing.us), a cult coffee shop in a tin shack known for its sourdough toasts and Memphis Group–inspired decor, Rubi and her fiancé, Rob Gungor, might be the most multihyphenate couple in town. She is a candlemaker-caterer-DJ-musician–graphic designer, while he is a perfumer-barista-musician-screenwriter (their perfumes and candles are for sale at the café).

That sense of boundary blurring extends to Marfa’s establishments. Big Bend Coffee Roasters is also an art gallery with largescale abstract paintings on its walls; the Well is a topflight yoga studio that also carries a serious and exclusive selection of Rhône Valley wines; and the sun-filled gallery Wrong Marfa, located in a tiny former church, also functions as a souvenir shop and events space. “Marfa is the opposite of a retirement community,” says Wrong’s owner, Buck Johnston, who moved here from California with her artist husband, Campbell “Camp” Bosworth. “We have so many young people coming and going,” adds Bosworth, whose hand-carved wooden Dairy Queen cones are on display throughout the stark space.